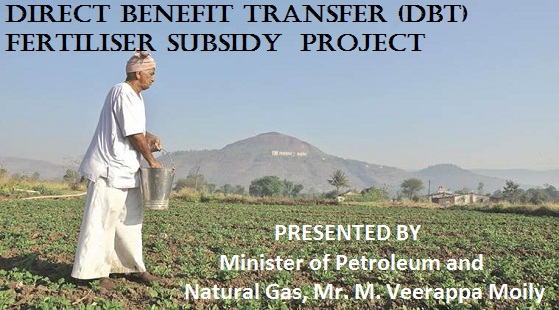 Direct Benefit Transfer Fertiliser Subsidy is a scheme that was launched back in 2013. The scheme is about giving subsidies to the farmers for fertilisers. After 4 years the scheme will be finally implemented in 2017 from the month of September. Under this scheme the payment for fertilisers will be made through point of sale machines. Important Point about the Scheme

There are a number of products on which subsidy will be given under the scheme. They are as follows Ammonium Sulphate, Di-Ammonium Sulphate, Muriate of Potash, Super Phosphate and Urea. Also some other complex fertilisers will be available at subsidised rates under this scheme.

Who will get the benefit?

Beneficiaries who have Aadhaar Cards and also they have bank accounts linked with their aadhaar number will get the benefit of the scheme. As it is mentioned that the subsidised amount will be sent through Aadhaar Payment Bridge, the beneficiary will have to have an aadhaar linked bank account. As mentioned companies will get the subsidised amount after 2 or 3 business days of transaction, the process is expected to be faster.

Also using POS will not allow the companies to offer high price or wrong price from the farmers. As well as the companies will not be able to perform any malpractice regarding the same.

The scheme has launched in 2013 but start implementing in this year only. During the month of June and July it was said to be launched. But lack of POS machines has restricted the authorities to start the scheme on time. As of now The Department of Ramnathpuram and Shivaganga have received 161 and 166 POS respectively. These POS have distributed among the private suppliers and Primary Agriculture Cooperative Credit Societies.